I visited the Hampshire College Summer Studies in Mathematics (HCSSIM) program for the annual YP Day, and am happy to report the program is as vibrant as ever this summer.

Yellow Pigs Day
For those not familiar with HCSSiM lore and what YP day is, the initials YP stand for Yellow Pig, one of the two mascots of the program. David Kelly, the director of the program, has perhaps the largest collection of yellow pigs in the world. 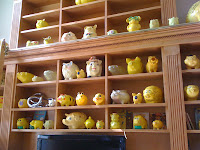 The other mascot of the program is 17, the favorite number of scads of summer studies students and alumni. YP Day (Yellow Pig’s Day) falls each year on July 17th, and is the traditional time for alumni to revisit the campus and reconnect with HCSSiM.
This Year’s Faculty
Arriving at HCSSiM on Friday in time for lunch, I met the faculty. In addition to Kelly, we have Rob Hochberg and Josh Greene also leading the workshops. Rob, a computer scientist, and I go way back to the 1980’s when we were both summer studies students, but this was my first time meeting Josh, a Columbia University mathematician, who attended HCSSiM in the 1990’s. To round out the crew we have the amazing:
and of course the indefatigable Susan Goff, who has been the program assistant for over a decade.
Prime Time Theorem
I got my chance to meet the students later that afternoon, when I explained How to Solve a Cubic to them as Friday’s Prime Time Theorem speaker. The students are as sharp as ever, and an enthusiastic audience. I ended my talk with some open-ended questions.
Although most of the summer studies students know the general answer, I hope that these questions and my talk will pique their interest for my Mini later this summer on the Fundamental Theorem of Algebra. Apparently another Mini will focus on Galois Theory, so HCSSiM definitely has this topic covered!
After dinner I had a chance to talk with the students during their problem session. They’re enjoying some Algebraic Number Theory, Cardinality Proofs, and Group Theory.
Saturday, July 17th
Yellow Pig’s Day fell on a Saturday this year, just perfect timing for the traditional Ultimate Frisbee Game, Kelly’s talk on The Mathematical and Social History of 17, the Yellow Pig Cake and the Singing of Traditional Yellow Pigs Day Carols.
Saturdays start off with the morning workshops, though. I was able to wander between the three workshops and observe a wonderful proof of Wilson’s Theorem, a listing of Group Theory axioms (after two weeks of examples), and some interesting Cardinality Proofs.
Mathcamp
Surprisingly close this summer is Mathcamp, another wonderfully rich math environment for high school students. Math camp is just a 15 minute drive from Hampshire College at Mount Holyoke College, I visited Dan Zaharopol’s class on Real Analysis, and Alison Miller’s class on p-adic numbers.
Among the more than 100 Mathcamp students, there are several who previously studied at HCSSiM, and I was intrigued discussing their positive experiences at both programs.
Ultimate Frisbee Game, HCSSiM 2010 vs. HCSSiM <>
My visit to HCSSiM 2010 ended with a grueling game of ultimate in excruciating heat. The alums were outnumbered three-to-one, but did well until the 2010 students developed a strategy that took advantage of their strength in numbers: they lined up and passed the frisbee down the field. Luckily, the aging alums still managed to come out ahead by dividing each team’s score by the number of players, and then multiplying by the average age.I drove back home soon after dinner, and enjoyed a beautiful double rainbow all the way through the Berkshires. I’m looking forward to returning in a few weeks to lead a Mini on The Fundamental Theorem of Algebra.